Most Beautiful Villages in Provence: the most beautiful and typical sites that make you fall in love with their landscapes and the sensations they produce in the visitor.

It is always a good time to visit this region of southeastern France, which falls in love with its landscapes, colors, and smells. Cozy, romantic, with charming villages and beautiful landscapes, Provence enchants and seduces all who discover it. And it is that this region that stretches from the shores of the Mediterranean to the Alps, known for its lavender fields, its medieval villas, and its excellent gastronomy, invites you to be visited at any time of the year. 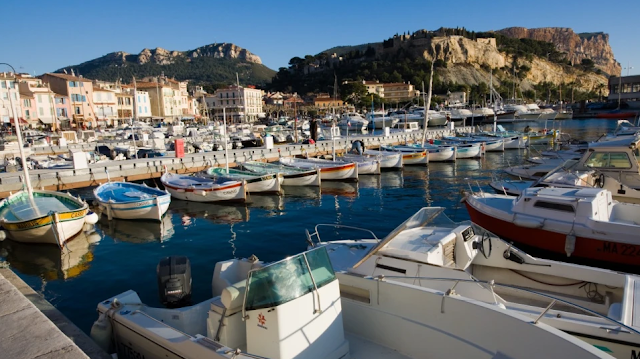 Each moment of the year offers a different color show. In summer, as now, it is marked by the smell and color of lavender, which will leave the place for the vine, olives, and saffron by the time autumn arrives. It is always a discovery to visit its crops and wineries, taste its wines, and join in the harvest festivities, get to know its villages, and enjoy its hospitality. Here we have seven whose beauty will not leave you indifferent, although there are many more.

Most Beautiful Villages in Provence

Many of these villages are located on rocky outcrops: this made it possible in the Middle Ages to defend against the raids of robbers. For such villages, there is even a term – Village Perche, “Village on the slope.” Over time, however, the need for protection disappeared, and many residents went down into the valley, and the villages themselves were abandoned. This allowed them to remain unaffected by new trends and changes. Pictured above is the village of Gordes, a typical  Village Perche .

Although many tourists visit, Cassis retains its essence of a fishing village and is possibly one of the most bohemian and classiest resorts in the entire region. Its old town allows you to discover numerous local craft shops. Flanked on both sides by rocky cliffs – popularly known as the Calanques de Cassis -, perfect for enjoying a walk, the town has beautiful beaches and a beautiful port where you can have a drink or enjoy a tasty seafood dish, watered by some of the famous wines of the region.

See also  48 Best Things to Do in Seattle 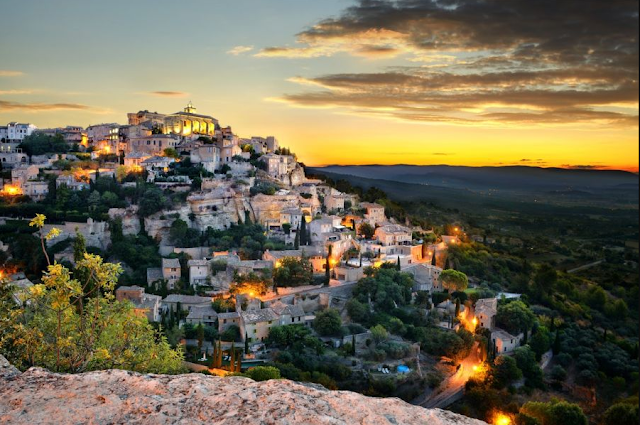 It is, in the opinion of many, one of the most beautiful villages in France. Hidden among the rugged landscapes of the Luberon Regional Nature Park, it has fallen in love with famous painters such as Marc Chagall and Jean Deyrolle, who frequented it throughout their lives. With cobbled streets and houses, Gordes enjoys an excellent location on the top of a hill that culminates in a 16th-century castle. Its views, large fields of poppies and lavender, and the ancient settlements – known as bories – are just some of the reasons you invite you to visit it. 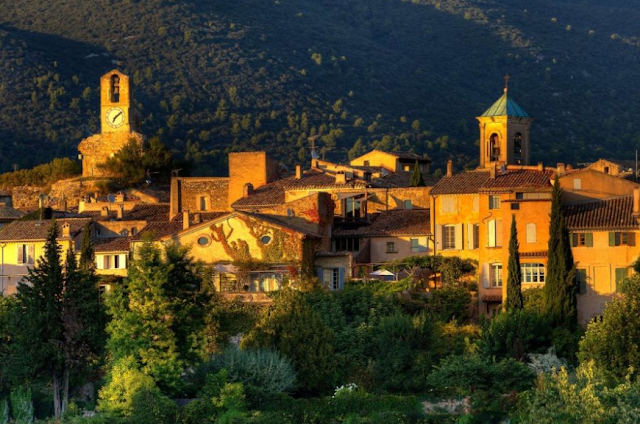 A short distance from Gordes is this town of just over 1,000 inhabitants that stands out for its refinement and captivates art lovers. Its picturesque stone houses from different eras offer a beautiful postcard. It has a Renaissance castle and a Neolithic cemetery where the remains of the novelist, playwright, and essayist Albert Camus rest. Foodies are in luck because the town is full of cafes and elegant restaurants, such as Auberge La Feniere, run by Reine Sammut, one of France’s most prestigious chefs. 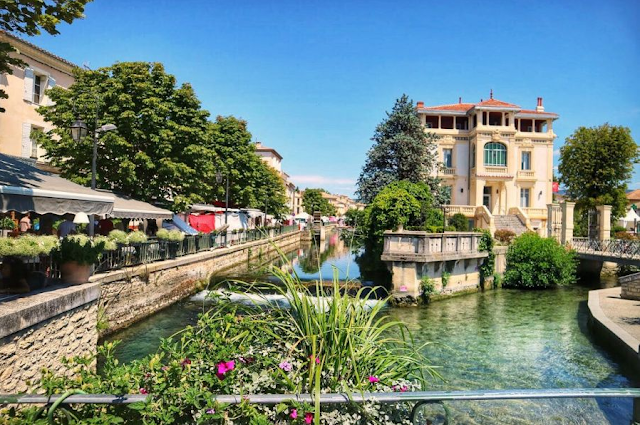 Popularly known as Provencal Venice, it is a relaxing and romantic town. Famous for its beautiful antique shops and it’s annual fair – one of the best in the world – attracts thousands of people. Another of the great attractions of this town, less than half an hour from Gordes, is to stroll along the Sorgue banks and stop at one of the classic cafes that flank it. 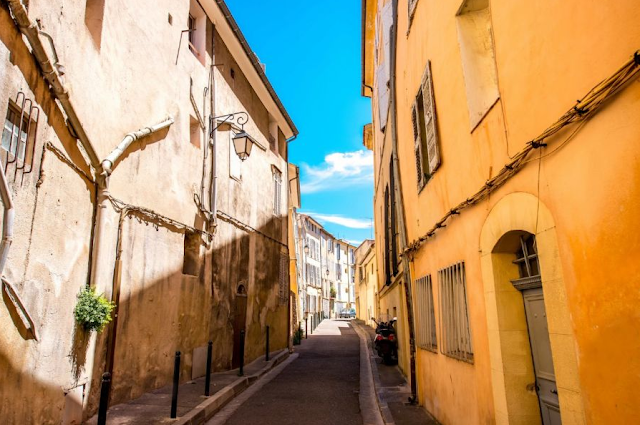 The ancient capital of Provence maintains intact the elegance that has accompanied it throughout the centuries. It has a historical and cultural center of the region on the Cours Mirabeau, a tree-lined avenue dotted with cafes, the epicenter of local life. Its light, fountains – no square does not have one -, the golden stone of its facades, its palaces, museums, and gardens invite you to know and savor it. And it is that Aix-en-Provence has countless treasures, among which the legacy of Cezánne stands out, who was born and died in this city. 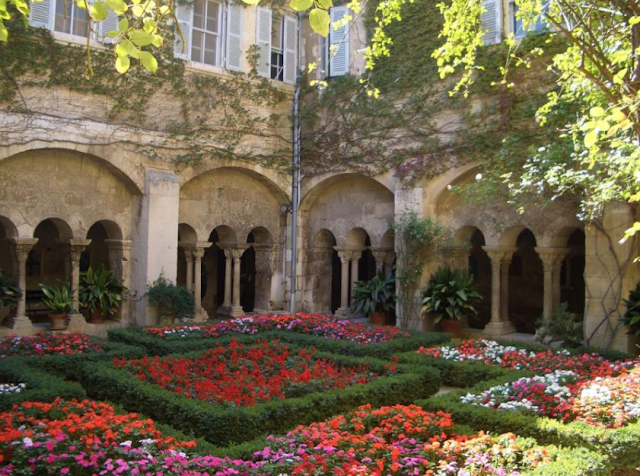 The scenery of inspiration for some of the most famous works of Van Gogh, who spent a season admitted to the mental hospital; this is a must-see destination for lovers of art and history. It is located south of Avignon and north of the Alpilles mountain range. It is undoubtedly one of the best-known towns in the area. The monastery, historic center, and the Roman site of Glanum are some of its great attractions, along with its excellent cuisine and cozy cafes.

Le Baux de Provence, or simply Le Baux, is located in amazingly beautiful rocky places. In general, this is not a residential village, mostly in ruins, has become one of the most popular tourist destinations: even in the off-season, the streets of Le Baux are challenging to push through. The main attraction of the village is the stunning castle ruins. This is not even a castle, it is a huge castle territory with cliffs, the ruins of a city, many of whose buildings were carved into the rock, and at the top of the cliff, there are the ruins of a castle, from where a stunning view of the surroundings opens. Must see.

See also  The 50 Best Tourist Places in France to visit

Roussillon – located near La Gorda on the side of a mountain, belongs to the Association of the  Most Beautiful Villages of France. But the main attraction of the village is not even the architecture in natural reddish shades, but the amazing beauty of the ocher canyon, located right next to the village. During a half-hour walk, you can admire the fantastic, red-colored Martian landscapes. 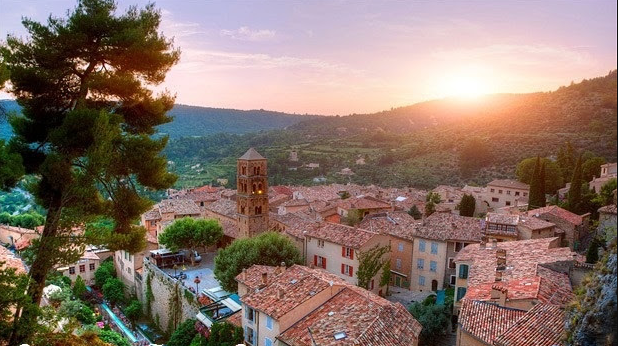 Moustiers Saint Marie is a picturesque rocky village listed by the Plus Beaux Villages de France. It is located at the beginning of the most spectacular stretch of the  Verdon Gorge, the most beautiful gorge in  France. The village itself stands on a plateau at the foot of a steep cliff, and a star has been shining above it high in the sky for many centuries. Old stone houses are combined with a Romanesque temple, and in the summer months, the lavender fields of the Valensole plateau spread around. 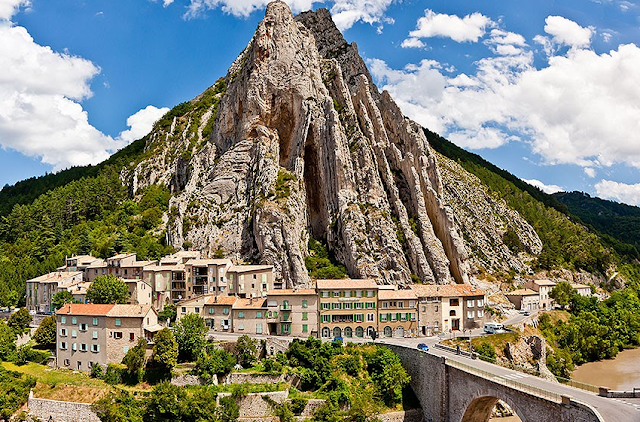 Sisteron  – a small town included in the recommended detour list. Sisteron is located in picturesque places with a characteristic ribbed rock in the background, the vertical strata of which are known throughout the world and are considered by geologists to be a fantastic miracle. A huge citadel, the main attraction of Sisteron, rises above the old buildings with traditional Provencal houses. 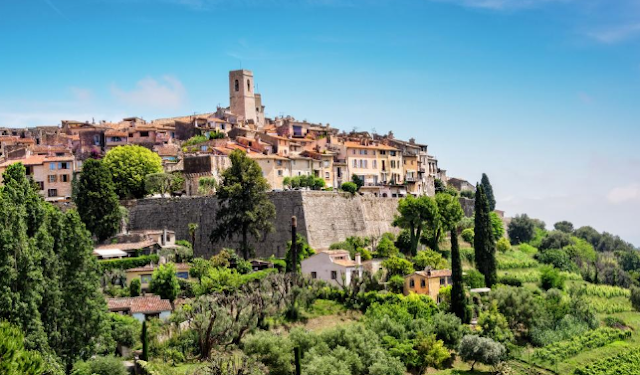 Saint-Paul-de-Vence is one of the oldest towns on the Cote d’Azur, a favorite place for many creative people, including Yves Montand and Marc Chagall. With a rich cultural background, Saint-Paul boasts an excellent museum of modernist and contemporary art. Located near Nice, Saint-Paul attracts many tourists, captivated by the beauty of the medieval streets. 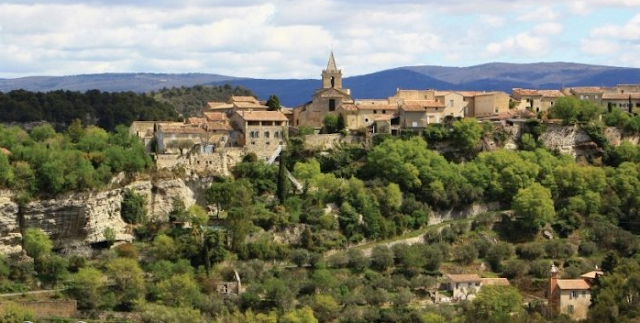 Venasque is a picturesque village on the slopes of Mont Ventoux, offering superb views of the Nesque Valley and the Vaucluse department. Venasque is included in the list of the most beautiful villages in France. Among the attractions of Venasque, the 6th-century baptistery stands out. However, the town itself has retained its medieval charm. In the vicinity of Venasca, there is a village of traditional dry stone huts – bories.

Oppéd-le-Ve was a clear example of an extinct village when all the inhabitants descended into the valley. The village was empty for several decades until the artists discovered it. With their own hands, they began to restore the destroyed houses, returning life to the empty streets. And now Opped retains to a large extent the appearance of a “dead city”, which gradually absorbs vegetation.

Avignon”Papal City” with one of the most significant medieval buildings in the world – an impressively powerful papal palace. The old city of Avignon, together with the papal palace and the remains of the ancient Roman bridge of St. Benese, are listed as UNESCO World Heritage Sites. Avignon is often the starting point for trips to Provencal villages.

No city is more closely associated with Provence than Nice. Nice is the pearl of the French Riviera, favored by the Russian aristocracy since the middle of the 19th century. The Dowager Empress Alexandra Feodorovna opened the fashion for Nice, and since then, the popularity of Nice among Russian tourists has not diminished. 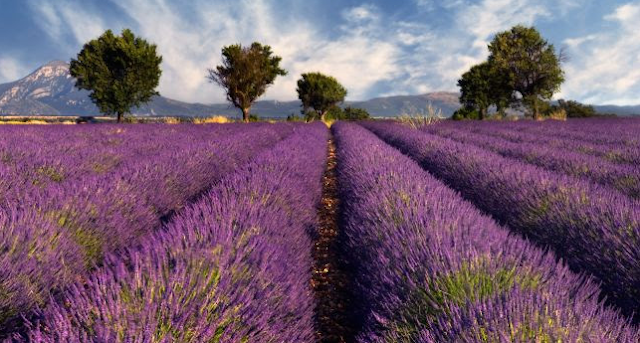 The Valensole plateau can be called a symbol of Provence. It is here that numerous lavender fields are spread, among which are stunningly beautiful Provencal villages: Sisteron, Manosque, the rocky Castellane, and the incredibly beautiful village of Moustiers-Saint-Marie. You can admire the lavender from late June to late July. By the beginning of August, all lavender fades, except for some high areas. 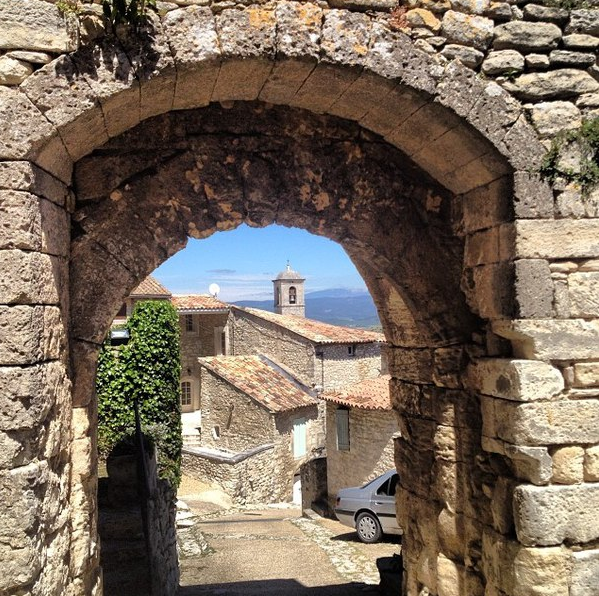 This is one of the coolest villages, located on the side of a mountain, the top of which is crowned with the ruins of the castle, where once, for many years, the notorious Marquis de Sade languished in captivity. In contrast, the rest of the village is the quintessence of an idyllic Provencal village, with ancient stone streets bursting with flowers, fluttering butterflies, birdsong, and stunning views of the surrounding valley. 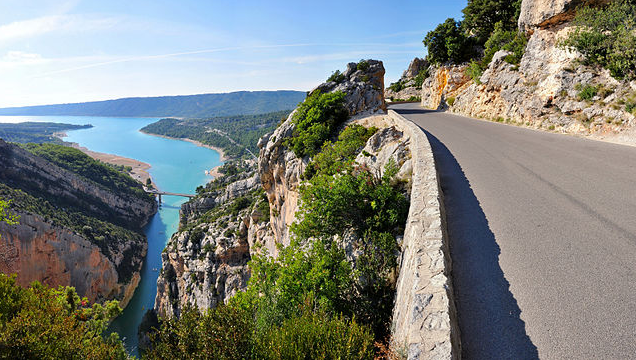 The Verdon Gorge is one of the most stunning locations in Provence, with dramatic landscapes and incredible views. It is rightfully considered the most beautiful gorge in France and awarded the sign Les plus belles gorges de France. 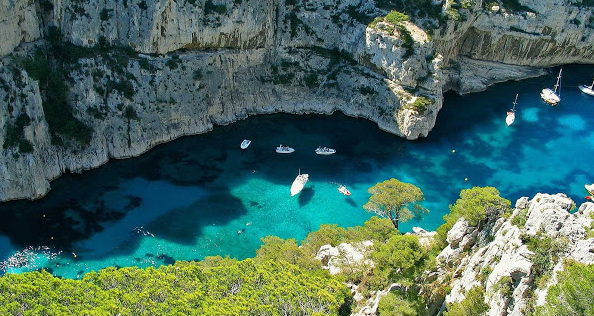 Marseille is Provence’s largest port, with all the pros and cons. International atmosphere and the best fish soup in France, bouillabaisse. If the stuffy city is not to your liking that around Marseille, you should see the magnificent landscapes of the coast – the Massif de Calanques. These picturesque cliffs, combined with the azure sea, are among the most beautiful and romantic places in Provence.

Provence is one of the most touristic regions in France. You can find popular resorts with beautiful beaches, ancient cities with luxurious architecture, natural reserves with fantastic landscapes, and quiet, uncrowded villages that have retained their medieval appearance. Many tourists go to Provence just for the sake of such villages, where time stood still a couple of centuries ago, where there is no imprint of modern culture, where everything is real … Some of these settlements were revived from oblivion by artists seeking inspiration. Carefully restored by hands, the villages have regained their inhabitants.