In addition to these 10 cities, there are many places to do tourism in Spain, for a reason it is the second most visited country in the world after France. Its varied architecture, its landscapes, its culture, its monuments, its climate and its gastronomy make the country one of the most desirable for tourists.

So without further ado, we tell you our ranking of the most beautiful cities in Spain that you should visit at least once in your life, always based on our opinion, our tastes and our experiences.

The Most Beautiful Cities in Spain

1. Barcelona, ​​the Most Monumental City in Spain

Barcelona has it all! culture, viewpoints, sea, good weather, and good gastronomy, and it is another of the cities that dispute the title of the most beautiful city in Spain. The wonderful works of Gaudí, such as the Sagrada Familia, Park Guell, La Pedrera or Casa Batlló, make it an open-air museum. 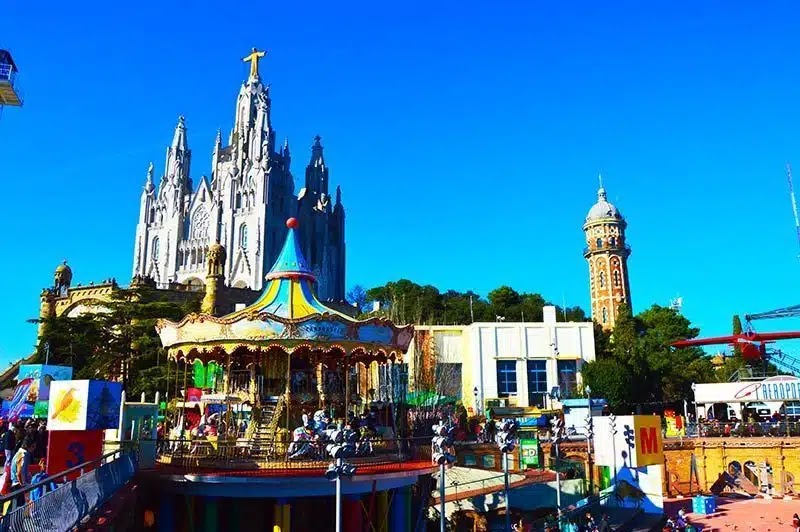 See More: Where to Stay in Barcelona For Sightseeing.

Its Mediterranean beaches, like the famous Barceloneta, are visited by thousands of tourists every year. All of this added to its numerous tourist attractions such as Montjuic, Tibidabo or El Born and its lively nightlife make the Catalan capital one of the preferred cities in Spain for foreigners.

2. Seville, the Most Beautiful City in Spain

Seville is probably the most beautiful city in all of Spain. Monumental, colorful, instagrammable, and welcoming. As those from El Río used to say, “Seville falls in love with the world for its way of being, for its warmth, for its fairs… Seville had to be” and they were not wrong. One of the most important attractions to see in Seville is its wonderful Plaza de España built in 1929. Among other recommended places in the capital of Andalusia are the Alcazar, the Barrio de Santa Cruz, the Triana neighborhood, the Macarena, the cathedral and its Giralda, the Torre del Oro, the Maria Luisa Park and the mushrooms of Seville.

3. Madrid, the City With the Greatest Leisure Offer in Spain

There are endless things to see in Madrid. The Spanish capital has a wide cultural offer to offer its visitors, which makes it one of the most requested cities by tourists. 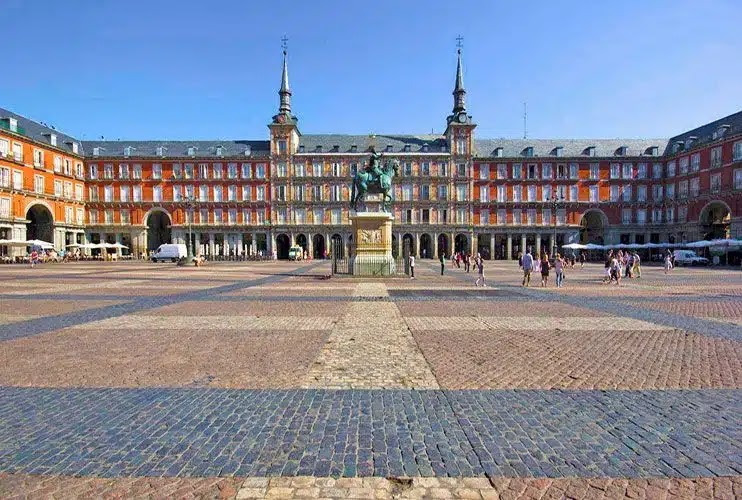 The Plaza Mayor, the Prado Museum, the Royal Palace, strolling through the Retiro Park, the Temple of Debod, the Puerta de Alcalá, its infinite museums or simply walking along the Gran Vía are some of the places that will amaze you in the city. No matter how many days you stay, there will always be something new to do.

If you want to know more, you can read our complete guide to where to stay in Madrid for sightseeing.

4. Valencia, the City With the Best Climate and One of the Most Beautiful in Spain

Valencia has become the most visited city in Spain every March because in addition to its magnificent climate, Las Fallas is celebrated here, a massive party where you can attend fireworks such as the mascletás and the burning of the ninots. 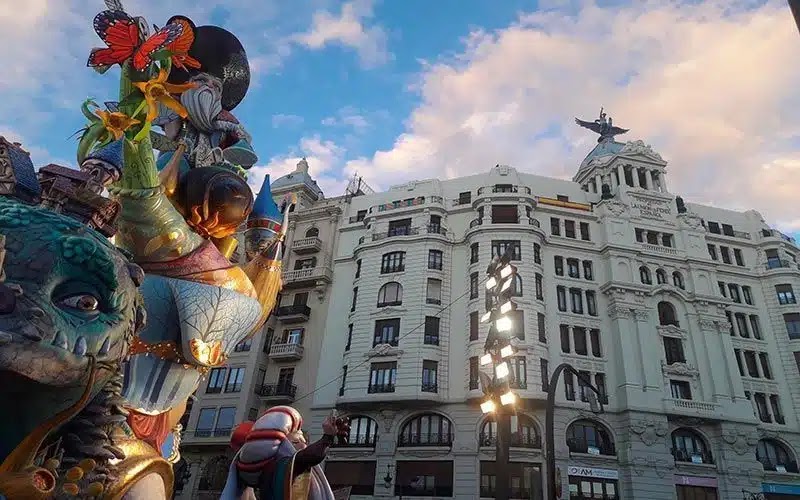 Other reasons why Valencia includes a list of the 10 most beautiful cities in Spain are the modern and avant-garde City of Arts and Sciences, its old town, the Turia gardens, its beaches… And as far as gastronomy is concerned, few dishes are more famous in the world than the Valencian paella.

If you want to know more about the best beaches in valencia, you can read our complete guide to the What are the Best Beaches in Valencia.

5. Toledo, Formerly the Capital of Spain

Toledo, the capital of the country between 1519 and 1561, is also known as the city of the three cultures because for several centuries it housed Arabs, Christians and Jews, completes our list of the 10 most beautiful cities in Spain.

Located just one hour from Madrid, it is one of the most beautiful medieval cities in the country. Its cobbled streets and its sword and armor shops will make you feel like you are in the Middle Ages. The main things to see in Toledo are the Puerta de la Bisagra, Plaza de Zocodover, the Catedral Primada, the Church of Santo Tomé and the wonderful views of the city from the Mirador del Valle.

If you want to know more, you can read our complete guide to what to see in Toledo.

6. Córdoba, the Most Charming City With the Most Beautiful Patios in Spain

Córdoba, although it is one of the smallest on the list, is one of the most beautiful and important cities in the country. Several of its monuments have been declared World Heritage Sites such as the Mosque-Cathedral or the Medina Azahara.

But what makes it really attractive is its patio festival where every May Cordoba houses cover their walls with pots full of colorful flowers to compete for the award for the most beautiful patio in Córdoba.

If you want to know more, you can read our complete guide to the best things to do In cordoba.

7. San Sebastián, the Jewel of the Basque Country and One of the Most Beautiful Cities in Spain

Strolling along Playa de la Concha, reaching the Peine del Viento, contemplating the beautiful Miramar Palace, or walking aimlessly through the streets of its historic center are some of the best things to see and do in San Sebastián, considered one of the most beautiful cities in Spain and certainly in the Basque Country for its extreme elegance. And it is that  Donostia was the city chosen by monarchs and aristocrats of the 19th century to spend their summers.

A pintxo route through the Basque capital is essential on your trip. And it is that San Sebastián will also conquer your stomach.

8. Granada, the City With the Most Visited Monument in Spain

Granada is one of the most visited cities in Spain thanks to the Alhambra, the most visited monument in the country, which protects the city from above. This marvel deserves a special mention and without doubt dedicate at least half a day to visit each of its areas: the Alcazaba, the Nasrid Palaces and the Generalife.

In addition to this historic place, there are other things you can do in Granada such as visiting the Albaicín, the Granada Cathedral, strolling through the Carrera del Darro, enjoying its tapas, shopping in the Alcaicería, attending a flamenco show in one of the Cuevas del Sacromonte or see a beautiful sunset from one of its viewpoints.

Salamanca is also included in our list of the 10 most beautiful cities in Spain and we believe that this city should be on every itinerary for a trip around the country. In addition to being declared a World Heritage Site in 1988, reason enough to include it on the list, its beautiful old town full of architectural jewels will make you fall in love completely. 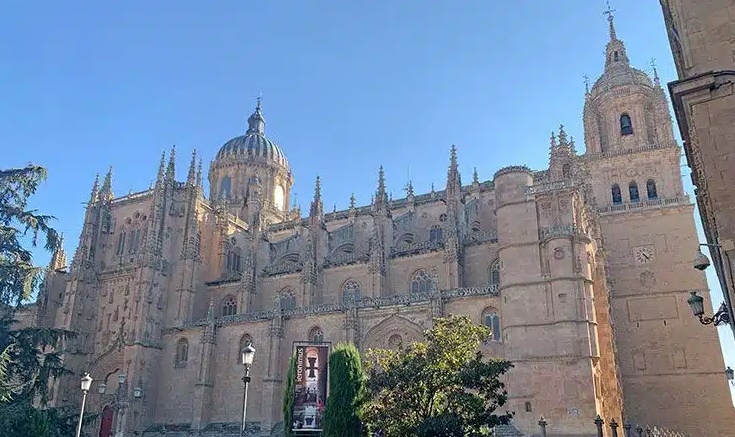 Losing yourself in the streets of Salamanca is a luxury that every traveler should have at least once in their life. The main places that you can see in Salamanca are its magnificent Cathedral, the house of shells, the Plaza Mayor, the University of Salamanca (don’t forget to find the frog) and the wonderful views of the old town from the Tormes bridge make it one of the most beautiful places in Spain.

Cáceres is one of the cities with the most beautiful medieval old town in Spain. Walking through it is like traveling through time. It is going back to medieval times and feeling immersed in a movie set, among its palaces, its stately homes and its cobbled streets. For all this, Cáceres has been declared a World Heritage Site by UNESCO.

The city has also been the setting for several internationally successful movies and series such as Game of Thrones and Romeo and Juliet. Here, in addition to keeping the maps and wandering the streets, you can visit the Plaza Mayor, the Plaza de San María, the Carvajal Palace, the Cistern and tour the Barrio de San Antonio, the old Jewish quarter.

How to Visit the Most Beautiful Cities in Spain

There are different ways to visit the most beautiful cities in Spain and they are all very well communicated by air and land through which you can move by plane, train, bus and car.

Depending on the area you are going to visit, one or another transport may be convenient for you.

If you are visiting, for example, only the north or only the south of the city such as Seville, Granada and Córdoba, it is better to do it by car or train since the cities are very close to each other. But if you want to go from Seville to San Sebastián or Valencia, it is better to buy a plane ticket because by land it will be very heavy.

If you do not have your own car or if you come from another country you can rent a car. The highways are very good, so it is a very good option to stop in other nearby cities. We always rent the car with auto Europe, which is the comparator with the best offers.