New York City is one of the most visited cities in the world and is surrounded by beautiful beaches perfect to visit during the summer season.

The best beaches in New York are open to the public so that they venture to visit them and cope with the strong heat wave that hits the city; know the top 10 of the best beaches near New York.

In addition to skyscrapers and shops, museums and Broadway plays, the five boroughs offer nearby sandy beaches with good waves.

With the swimsuit on early and after breakfast, in a bag, we carry sunscreen, a hat and a towel because the plan for the day is to rest on the sand and enjoy the waves. We are also going to read the book that we did not start on the plane – we saw two movies – and, at sunset, we will probably walk or rent a bike. Where we are? Although no one guesses the riddle: we are on holiday in New York!

The 17 Best Beaches in New York

Skyscrapers and Broadway, Central Park and Fifth Avenue, museums and bridges … In addition to the emblematic attractions of the Big Apple, during the summer of the Northern Hemisphere, we can go to the beach in NYC. And the five boroughs (Brooklyn, Queens, Manhattan, Bronx and Staten Island) that make up the United States metropolis have 14 miles of golden sand.

The best beach, probably, and it is located in the center of the “long island” (in English, Long Island). It belongs to the state of New York, has an area of ​​about 3,600 km 2 and measures 190 km to the easternmost end, where the small tourist town of Montauk is located, better known in recent years because part of the series The Affair takes place there. Actually, Long Island is home to Brooklyn and Queens in its western part and Nassau and Suffolk counties in the eastern part. 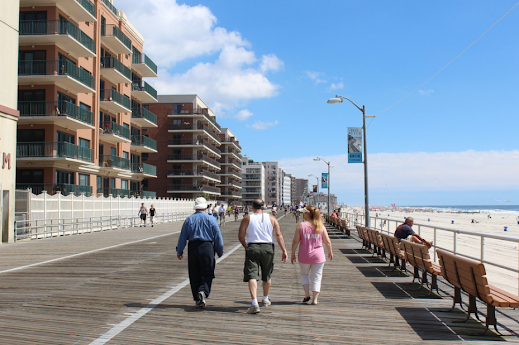 Although the island has several beaches, towards the center and on the south coast, Long Beach offers a large stretch of sand, good waves and a boardwalk wooden (a kind of boardwalk) for walking, running or biking, where there are bars and restaurants.

All this, three or four blocks from the train station, with which you can get there in an hour from Penn Station. Of course: access to the beach is not free and costs about $ 15 per person. You can rent umbrellas with deck chairs and bicycles. Super recommended experiencing a totally different day in New York.

Being a classic, this beach is worth visiting sometime in your life. Between buildings and roller coasters, hot dog eating contests and mermaid parades, New York’s kitsch beach draws people of all ages and nationalities. If what we are looking for is to rest, ride a bike, swim and read a book on the sand, it is probably not the right option. In that case, it is best to see what it consists of and, if it is overwhelming or incompatible with the concept of “open air” that is sought, never come back.

See also  What You Can't Miss on a Beach Getaway

When you think of Coney Island, roller coasters and the big Wonder Wheel facing the sea are the first postcards that comes to mind. Since 1927 the cries of those who climb the iconic wooden mountain “Cyclone” have been heard in the sand. Add the screams from fans of “Thunderbolt,” another historic mountain remodeled a couple of decades ago that is also located at the vintage Luna Park amusement park (1000 Surf Ave.). 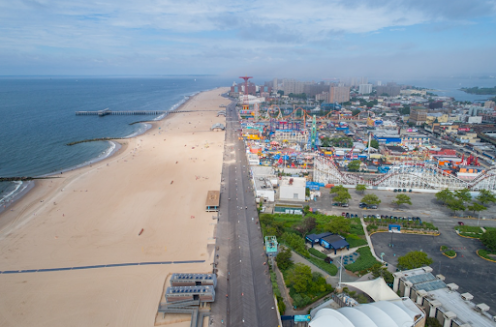 A few meters away, the “Deno’s Wonder Wheel” turns at Amusement Park, a round the world tour that appears in all the photos, like the aquarium and the B&B carousel. As every year, in June the “Mermaid Parade” is celebrated, a multicolored parade that represents the beginning of summer (this time, the call is for June 22), while in Nathan’s Famous, the restaurant that serves hot dogs Since 1916, the contest to eat hot dogs will be organized again during the holiday of July 4.

On this popular Brooklyn beach, some breathe nostalgic charm and others prefer to escape the crowds and junk food. Far from being the best beach, it attracts many families for being close to Manhattan and several subway stations, as well as for its iconic attractions along the famous boardwalk full of dining options. 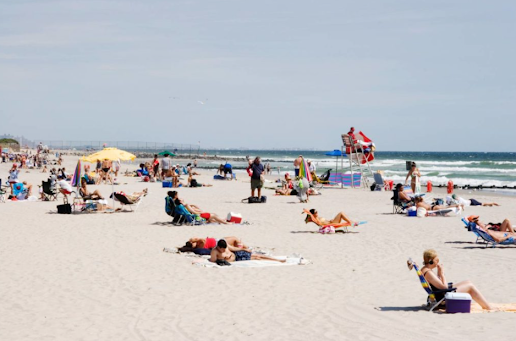 Smaller and more intimate than its neighboring beach, it represents a break from surfing and sand, where you can taste typical Eastern European dishes. In the restaurants that occur along the promenade of the also known as “Little Odessa”.

You can walk from Coney Island or take the tube to Brighton Beach. 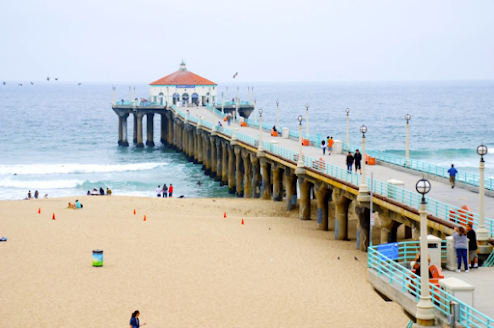 Originally founded as a private resort for a certain Manhattan elite (that’s why it gets its name), neighboring Brighton Beach welcomes all visitors who want to spend the day and lounge on its sands.

It’s quiet compared to the other nearby Brooklyn resorts, but its kids’ play areas, barbecue spaces for roasts, and numerous sports fields keep these beaches lively.

If the song assured that it was not difficult to get to Rockaway, it is much easier now with the NYC Ferry, which connects various points of Manhattan with Queens. And if not, the metro is always a good option to get there quickly and for a price similar to the ferry. 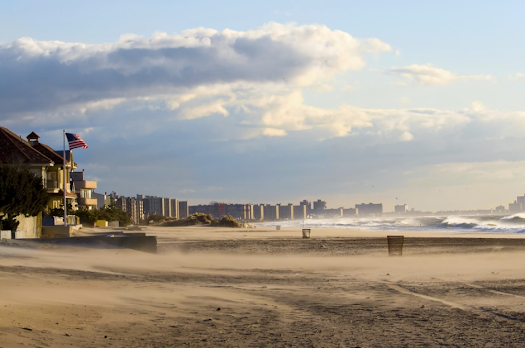 Rockaway Beach is a wide beach – it is 11 km long -, clean and full of surfers and fishermen. West of the Cross Bay Bridge is the most pleasant part, while the boardwalk was rebuilt with new restaurants, playgrounds and sports fields. Surfers find good waves all year round.

Please note this year, however: Rockaway Beach will be closed from 86th Street Beach to 110 Street Beach due to dredging operations.

See also  30 Most Beautiful Beaches in the Dominican Republic

Also in Queens, Jacob Riis Park is a popular beach, considered a “little cousin” of Rockaway. . In general, there are fewer people there and it has a longer stretch of sand to walk along the shore. Of course: during the weekends, there is no lack of live music and vendors on the beach.

The subway goes to Pelham Bay Park in the Bronx, the largest public park in the city (more extensive than Central Park in Manhattan), it has the advantage of hosting the Orchard Public Beach. They are about 2 km long, which is often called “the Riviera of the Bronx”. 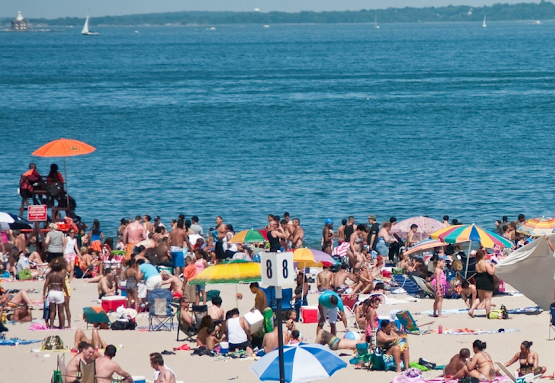 Walking along the 1930s promenade is a good program, tasting snacks in the bars and resting in the picnic areas since the beach is not the quietest. Among the services offered by the place, the areas for barbecue, volleyball, basketball and games for boys stand out. .

The water is not as deep as on ocean beaches, and it can be very crowded with children and adults… Orchard Beach is certainly not the quietest.

With the same ferry that departs from Lower Manhattan, you can reach two of the best beaches on Staten Island: South Beach and Midland Beach. 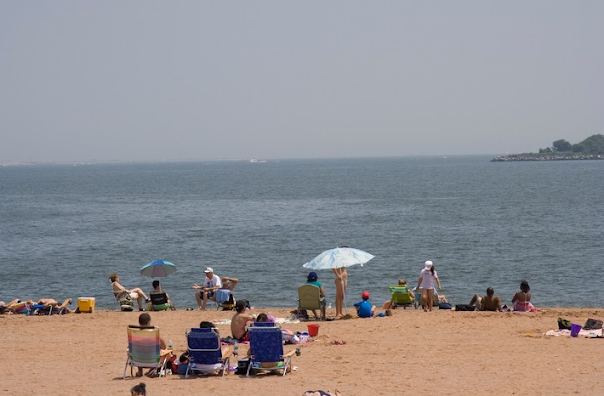 The two are linked by the Franklin D. Roosevelt Boardwalk, South Beach is characterized by its picturesque views of the Verrazano-Narrows Suspension Bridge (connects Staten Island with Brooklyn) and the Ocean Breeze Fisherman’s Wharf. At the entrance, there is an unmistakable fountain with bronze dolphins.

As its name implies, Midland Beach is located further in the middle of the island, including a turtle fountain and playground. It is more familiar and silent than South Beach. 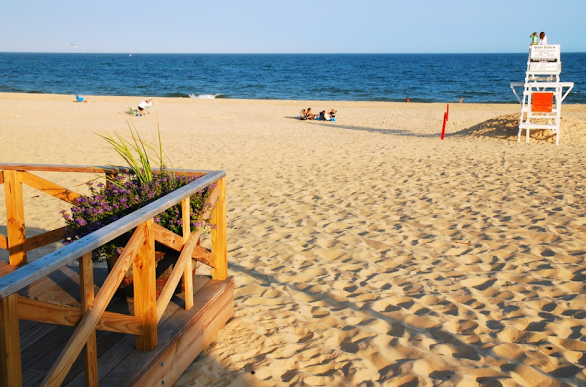 It is rated as one of the best beaches in the United States, it is located in East Hampton, home to many rich and famous of the country, in fact, the beach has food stalls, quality bathrooms, lifeguards throughout the day and the sand is very clean. 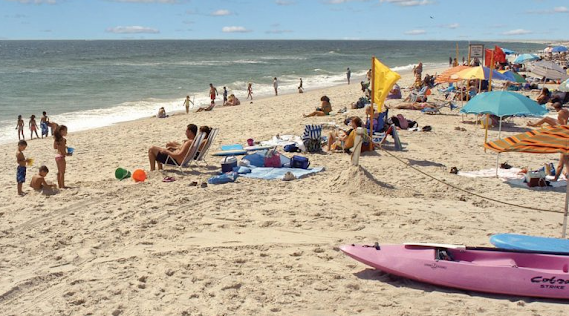 It is one of the most famous beaches in the New York area, it has six miles of sandy beaches and a boardwalk, plus the Jones Beach Amphitheater offers concerts throughout the summer. 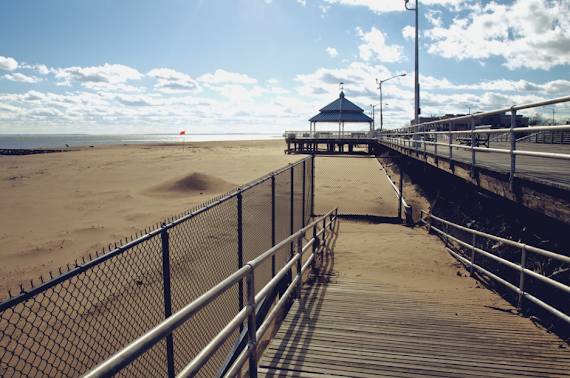 It is known for its popular fishing pier and bike path, has a fountain of sea turtles and is home to handball and shuffleboard courts. 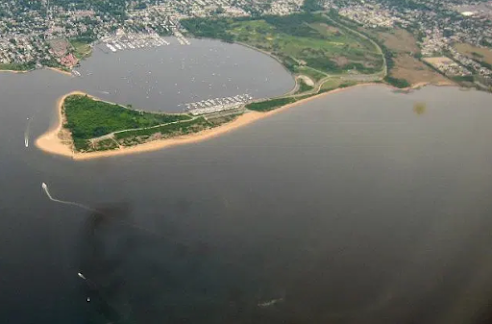 This fantastic beach of almost 4 kilometers in length is located on Staten Island. It is a beach that despite its location, we can almost consider it a rural beach, with practically no buildings around it. Therefore, we will not find the services present in the previous ones. However, due to this and that its accesses are more complicated, the beaches of Great Kills Park are much less crowded, being an ideal place to enjoy the magnificent views of New York Bay in a relaxed way, either from the sand or from its magnificent promenade. 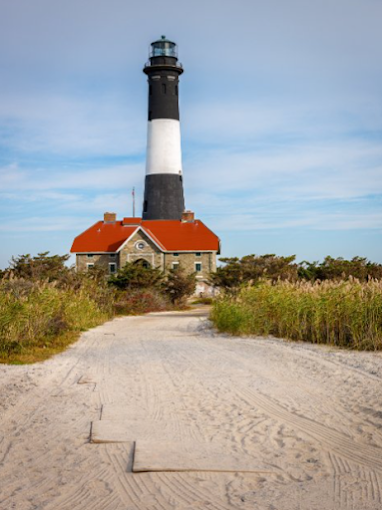 Imagine that one day, during your stay in New York, you get tired of people traffic and heatwaves. If there is a place to cool off and a beach that is worth it, this is Fire Island. In a quiet place where you can drive and park without a problem. It is one of the cleanest beaches in New York and also the emptiest. The beach is surrounded by the myth that pirates used to come who lit fires to attract ships, and hence its name. It can also be reached by train or ferry, taking just half an hour. Don’t forget your photo with the lighthouse!

We have already told you many times that Governors Island is unique and that it has many free activities. The park is very creative and is open all year round. To get there is very easy, you get on a free ferry from Brooklyn and that’s it. When you arrive, you can see the skyscrapers of Lower Manhattan, the Statue of Liberty, have a picnic, explore the exhibits or attend the events.

But those who know the island the most go to the beach where you can lie down and watch the skyscrapers of Manhattan. I suggest that you explore the entire island, try the gastronomy (especially the oysters which are a delight) and lie in the sun on the beach.

Plum Beach is a quite hidden and exclusive beach, in fact, the residents are almost the only ones who bathe on this beach. Its calm makes it also attract people who want to barbecue or just want to spend a relaxing afternoon. And if you don’t like the beach, don’t worry, it also has nature walks and getting there is relatively easy, first you take the train and then a bus or walk 20 minutes. Worth! 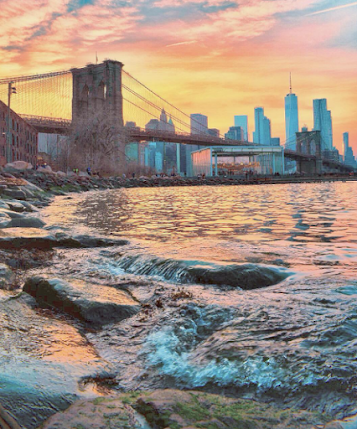 Mussel Beach is another little beach almost as small as Pier 4, although this beach is not for lying down or playing volleyball. Its greatest charm is the views you will have of the Brooklyn Bridge and the Manhattan Bridge. Many people sit on logs, large stones, or cement seats next to it. During the weekend it is common to see many quinceañeras, lovers taking photos for their wedding or parties. It is one of the most pleasant and beautiful places to be found in Brooklyn. 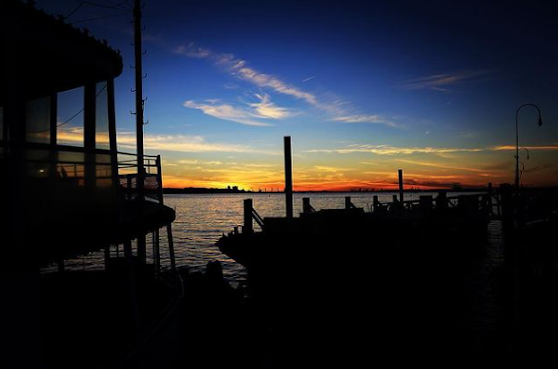 It is perhaps the smallest beach but I include it because it is adorable and romantic. I know people who have come here to have a date in the park and to spend a very pleasant afternoon watching the sunset and the skyscrapers of South Street Seaport. I have sat with my family and I have enjoyed an ice cream from Ample Hills which is very close to Pier 4. To get to this beach, you must walk to the center of the park from any entrance.

Although many already know it, it never hurts to remember that the ferry that connects Manhattan with Staten Island is free and the trip takes no more than half an hour, with views of the incredible skyline of the Big Apple. 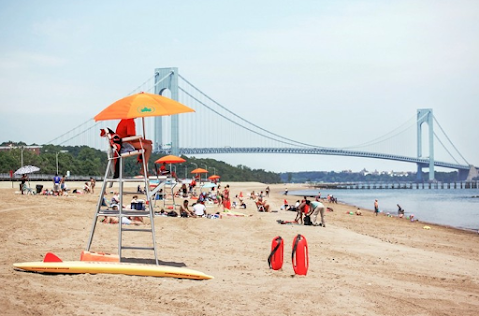 The once privately owned resort is the newest addition to New York’s public beaches, becoming a quiet, family-friendly space for sunbathing and lounging by the water.