Best Beaches In Asturias: The Cantabrian Sea has beautiful beaches and many are in Asturias, both in its cities and towns and in remote places where they remain almost virgin. These are the 15 best beaches in the principality.

This beach in the Asturian council of Cudillero was until recently a paradise for nudism due to its solitude. Now it is more frequented, but it still maintains the conditions of a discreet and almost pure place. Underwater fishermen who are certified by the principality to carry out their activity have a splendid place to fish on this beach with its clear waters. 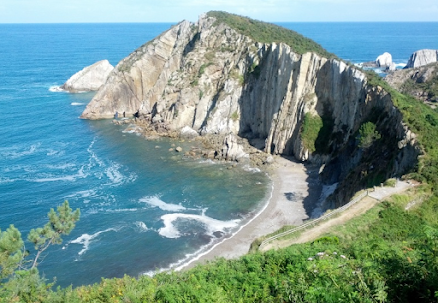 The area has the names of Protected Landscape, Special Protection Zone for Birds and Site of Community Importance. It has magnificent landscapes, including cliffs and mountains, and to reach it you have to descend a staircase of 111 steps from the town of Castañeras.

It is a small natural gem that is 100 meters from the coast. The sea was perforating the limestone rock creating a cave that collapsed, emerging a hole about 50 meters in diameter in which this curious beach was formed inland, although connected to the sea. It is surrounded by cliffs and green vegetation and its only access is on foot, from San Antolín beach. 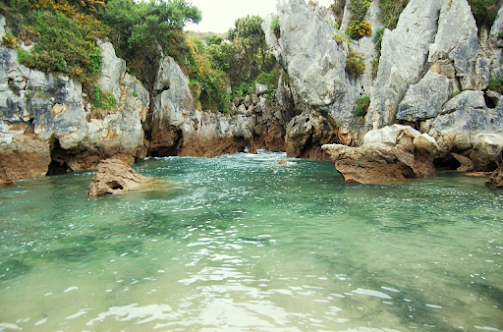 It is located halfway between the councils of Ribadesella and that of Llanes, although it belongs to the latter. The isolation of the place, together with its small area and the deliberate lack of services, has facilitated its maintenance in an almost virgin state. In addition, it was declared a Natural Monument and is part of the Protected Landscape of the Eastern Coast of Asturias.

It is a beach of sand and gravel located in the Asturian town of Naves, about 1,200 meters long and with intense waves because it is facing the open sea. It has an estuary into which the Bedón River or Las Cabras River flows, which originates in the nearby Sierra de Cuera. From the beach, you can see the eastern foothills of the mountains as they approach the sea. 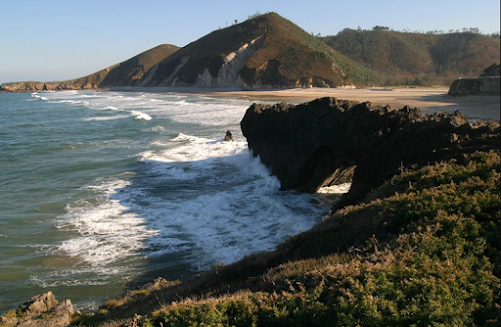 The estuary is also a place of interest due to the abundance of trout. Another attraction near the beach is the temple of San Antolín de Bedón, a Romanesque Benedictine church from the 13th century, which is close to the monastery of San Salvador de Celorio.

It is a spectacular beach with a sandy area that reaches the very bases of the mountain ramifications that make up the eastern part of the Sierra de Cuera. The beach, wild and beautiful, is part of the Protected Landscape of the Eastern Coast of Asturias and from it, there is a beautiful view of the foothills of the mountains. 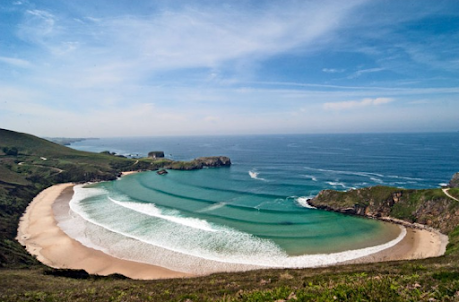 Its sand is fine and the waves are strong. Another of its attractions is that it is semi-closed by cliffs. Because of its isolation, it is a nudist beach. To get to Playa Torimbia, you have to walk a path of about two kilometers from the town of Niembro. 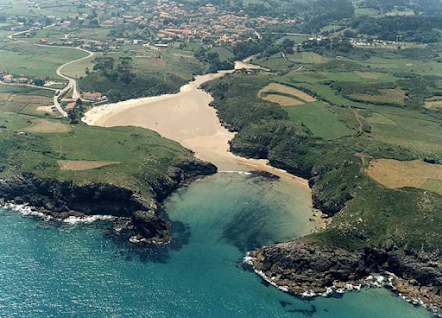 It is a flat beach delimited by beautiful internal cliffs that hardly allow you to see the open sea. When the tide rises, the water penetrates through the naturally open channel in the cliff and is dammed, forming a delicious natural pool. This sea pool with a fine sand shore is shallow, ideal for the whole family, especially the little ones. The beautiful surrounding meadows are an additional attraction. You can get to the beach directly by car or on foot from the town of Poó. 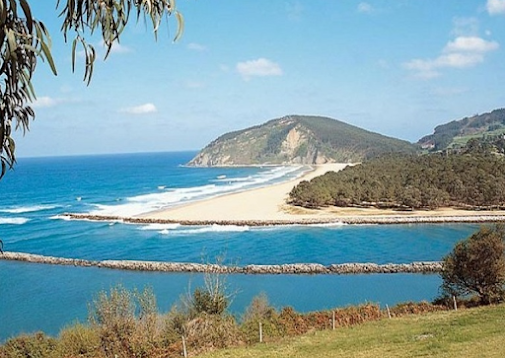 It is located on the eastern side of the mouth of the Villaviciosa estuary, in the Asturian council of the same name. It has a kilometer of fine, golden sand and a sea that produces waves that have been classified among the best in Europe for surfing, which is why it attracts a strong national and international tourist trend of enthusiasts of this sport. . Along the beach there is a large picnic area, with pine and eucalyptus trees, ideal for a picnic. The beach is part of the Ría de Villaviciosa Partial Natural Reserve. 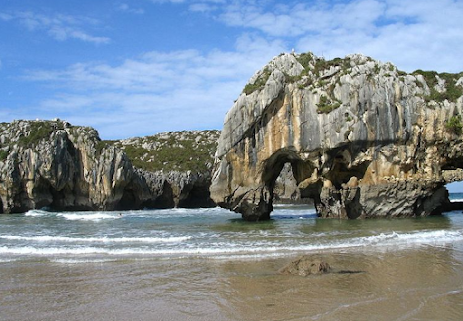 The main attraction of this beach located in the municipality of Llanes are the striking holes drilled by the erosion of the sea in the limestone cliffs near the shore and others further away. Cuevas del Mar Beach is easily accessible by car and bus, so it has a large influx of visitors. It is 125 meters long and is located at the mouth of the Cuevas River. Its waves are moderate although it is not dangerous and it offers a good level of services, including ample parking. 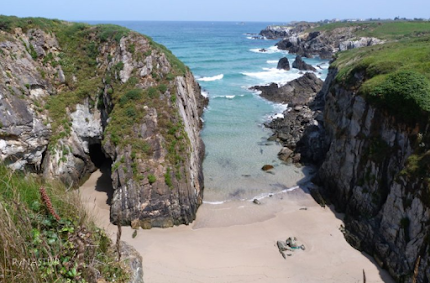 This beach is located near the town of Santa Gadea, between the Asturian councils of Castropol and Tapia de Casariego, belonging to the former. In the place, the river Dola or stream of Penarronda empties, dividing the beach in two sectors. It is flanked by two cliff structures, Punta del Corno and La Robaleira.

It is 600 meters long, being the longest in the Castropol council. In its central part is the Pedra Cstelo. The Sea Wallflower ( Malcomia littorae ), a perennial plant of showy flowering, has its only Asturian habitat in this area. It is also a breeding ground for the Eurasian oystercatcher ( Haematopus ostralegus ), a beautiful caradriform bird. 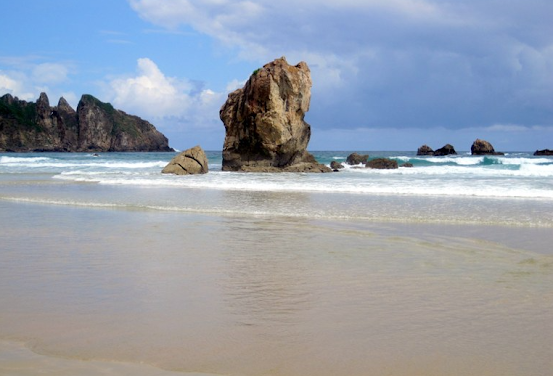 It is the busiest in the council of Muros de Nalón and its main attraction is its rocky area in the middle of the beach. It is located between Punta del Gaveiro and Punta Castiello and is used as an anchorage for pleasure boats. It is frequented by surfers and divers. It has easy access and parking and has a small promenade. Aguilar is the starting point of the Ruta de Los Miradores, a striking Asturian coastal stretch. 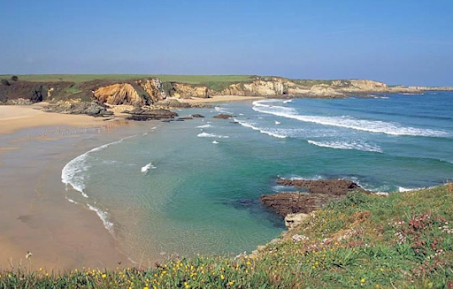 It is located in the council of Tapia de Casariego, near the town of Serantes. It has a useful length of just over 200 meters and the Tol river empties into it. It has a wide sandy area of ​​fine grain and attractive golden color. It has a moderate swell and is surrounded by a rural environment of cornfields and other plantations. It is frequented by fans of diving and sportfishing. Another attraction located a short distance away is the castle complex of El Castelón. 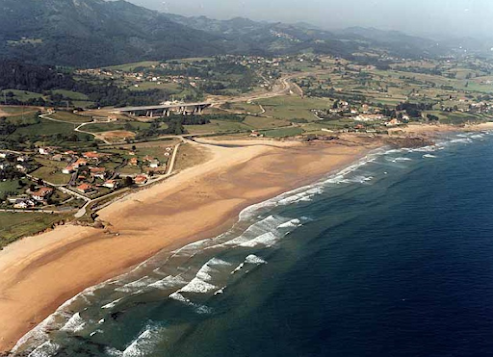 This beach has the curious peculiarity that it is shared by the councils of Colunga and Caravia, since the Carrandi river, which is the border between the two territories, splits in two when it empties into the sea. On the Caravia side, the last 75 meters are called El Pozo de las Pipas Beach, although the sector is independent only at high tide.

Playa de La Espasa is suitable for surfing and in May, its winds are used for a picturesque kite flying festival. Colunga is part of the Coastal Route of the Camino de Santiago and La Espasa was an old pilgrim’s lodging. 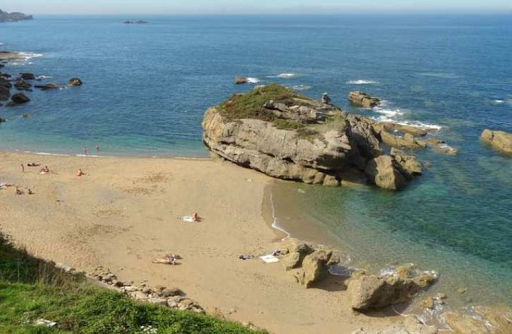 The main peculiarity of this beach in Gijón is a gigantic rock very close to the shore that divides the beach into two areas. When the sea level rises, the huge stone looks like an islet. The sand of Playa de Estaño is an attractive burnt golden color and the sea has intense waves, the left part being the most advisable for bathing. It is only 5 kilometers from the city of Gijón and among its enthusiasts are fans of underwater fishing and diving.

This conked beach with crystalline waters belonging to the Asturian council of Cudillero visibly changes condition depending on whether it is at high tide or low tide. At high tide, the land surface is made up of boulders, but at low tide, it reveals a sandy area of ​​golden grain. 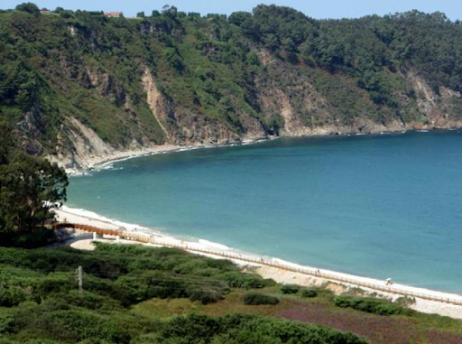 It is a very well protected beach and is part of the Protected Landscape of the Western Coast. A local legend points out that it was an anchorage site for submarines during World War II, although there is no documentation to confirm the version. 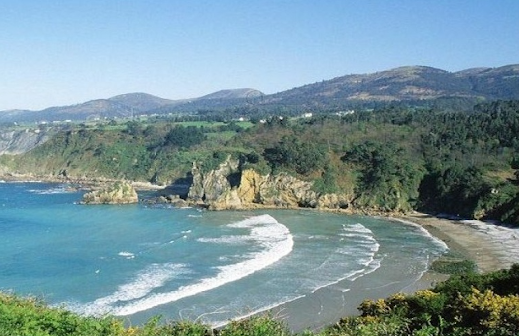 Also called La Ribeirona, this Asturian beach is located in the council of Valdés, near the town of Cadavedo. This town became famous in 1951 when it was awarded the name “Most Beautiful Town in Asturias.” Since then, its interest as a tourist destination has grown. The rural beach is crowded in summer, favored by its large parking area and easy access. It was a whaling center during the Middle Ages.

This popular beach is located in the heart of Gijón, the most populated city in the Principality of Asturias. Gijón is dotted with its well-known stairs that go down to the coast and this beach goes from Escalera Cero, behind the temple of San Pedro, to Escalera 16, at the mouth of the Piles River. 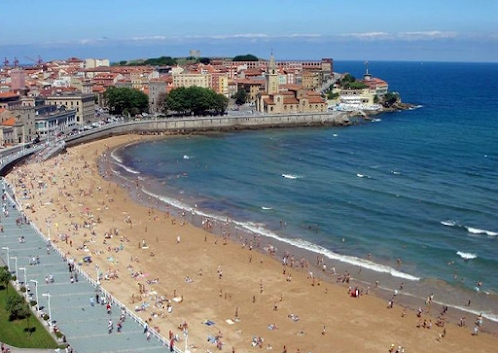 It is a kilometer and a half long and is made of fine golden sand, although the waves are intermediate to strong, which is why it is monitored by lifeguards. Due to its location, it is guaranteed a high influx and is the scene for the practice of beach soccer, beach volleyball, surfing, kayaking and other beach entertainment.

Our short walk through the Asturian beaches comes to an end. We hope you liked it and that you can leave us a brief comment.